A lot of rap conspiracies are fun: reptilians run the music industry, rappers are cloned on the regular, Jay-Z is a time-traveler, etc.

"Memphis Rap Sigils," however, is perhaps the most horrifying concept on the entire Rap Conspiracy Iceberg. This one has rumors of everything: hidden gateways to hell, murder energy, worship of Egyptian gods, and even the West Memphis 3 killings.

Even without the sigils, Memphis rap is pretty horrifying. In New York, they chopped up Isley Brothers records to make beat. In Memphis, they would take the sounds of women screaming from horror movies and snuff films and make a banger out of it. It's music made for wandering around a graveyard at 3AM with a few tall cans of Steel Reserve - not exactly the type of stuff you want to put on when someone hands you the aux cord. 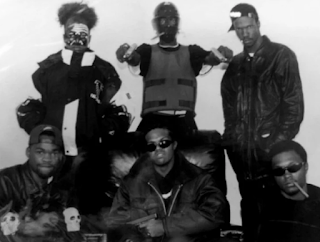 The 2018 documentary "WELCOME TO HELL" is worth watching to get a better idea.

The music had an evil sound to it, so naturally, rumors spread that the people behind it were involved with occult activity and devil worship. This is nothing new in Memphis, a place long rumored to be an epicenter for the dark arts.

In his amazing NWO documentary, Koopsta Knicca (RIP) from Three 6 Mafia tells a story of going to downtown Memphis to do the cover shoot for their horrifying debut album Mystic Stylez. The cover itself features Koopsta hung on a cross wearing some creepy Eyes Wide Shut-type mask. While recording, they found a creepy warehouse across the street from the video shoot. When they walked in, they saw a bunch of white dudes wearing robes doing weird spooky shit. He mentions they even had some type of weird altar. You can go all the way back to the 1800s for stories about the heritage of hoodoo in Memphis.

But where did the idea of "Memphis Rap Sigils" truly start? Like most good conspiracies, you can trace its origins back to 4chan.

Looking back through the /x/ archives, the first time you see the idea of Memphis Rap Sigils starts in around August of 2017. Its first appearance just so happens to be on an early version of one of the Conspiracy Icebergs.

This image/thread appears to be the first time the specific phrase "Memphis Rap Sigils" is used online. It didn't hit Google Trends until December. 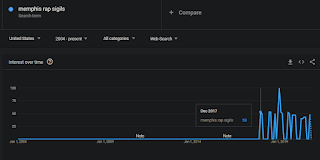 A few replies in to the thread, someone asks about the meaning of these mysterious sigils. 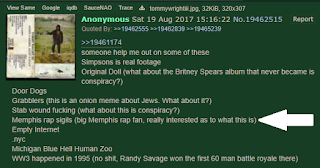 The guy only got a handful of responses. One dude mentioned that Memphis rap music has occult ties - not exactly breaking news. Another anon linked a podcast from Illuminati member researcher Issac Weishaupt. The podcast features William Ramsey, an expert on the West Memphis 3 murders. Ramsey is convinced the murders were occult in nature, essentially some sort of sacrifices made to the lords of the underworld. More on that later.

After that first thread on /x/, more posts started popping up asking questions specifically about the sigils.

In this post, he links "Hellraiser" by Maniac and the full Goin Undercova mixtape from Lil Ramsey. This is where the most commonly understood interpretation of Memphis Rap Sigils is first introduced: capturing the soul energy released by murdering a human being on to a cassette recording in a Luciferian ritual.

Perhaps this energy could then be used as an ingredient in chaos magick and/or sigil creation?

"Chaos magic, also spelled chaos magick, is a contemporary magical practice. It was initially developed in England in the 1970s, drawing heavily from the philosophy of artist and occultist Austin Osman Spare. Sometimes referred to as "success magic" or "results-based magic", chaos magic claims to emphasize the attainment of specific results over the symbolic, ritualistic, theological or otherwise ornamental aspects of other occult traditions."

"Chaos magic is built around an experimental, D.I.Y. approach that involves stripping all magical techniques down to their barest essence, any practice from any magical tradition can be incorporated under the banner of chaos magic: from Satanic ritual, to Wiccan sabbats, to energy healing, to Tantric practices, etc."

Interesting. Now, we finally get to the sigils:

"In modern usage, especially in the context of chaos magic, sigil refers to a symbolic representation of the practitioner's desired outcome.

In the Medieval era, a sigil was a symbol associated with a particular angel or demon, which could be used to ritually summon the relevant being."

Once the sigil is created, it must be charged with energy. From House of Intuition:

"The final step is charging the sigil: filling the symbol with the necessary energy to accomplish its task. The symbol of your desire is just a symbol until you charge it. Whether you call this charging energy ki, qi, prana, mana, or the Force, you can manipulate it with your attention. " 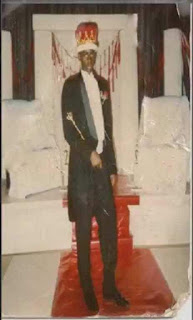 So we now have a basic recipe for how to create a Memphis Rap Sigil.

From there, whatever they wished now has enough energy to manifest itself into reality.

In other words, every time you listen to one of these recordings, it's powering up some sort of fucked-up sigil created by an evil rap wizard. If the sigil's purpose was for fortune & fame, then its creator would immediately become rich and powerful. This anon summed up the idea nicely:

Even if you don't believe any of this stuff about Memphis rappers, you have to wonder if similar things are happening with pop-stars and other famous musicians. Ever wonder why we never really see video footage of hit songs being recorded in the studio?

So what if this power was used for something other than just selling records and obtaining fame? Is it possible to use this evil, charged energy for more sinister purposes, like hexing your rivals and cursing those who stand in your way? By simply listening to certain music, are we accidentally partaking in some sort of demonic worship?

Back on /x/, more information started coming up in the months after the concept was first mentioned. 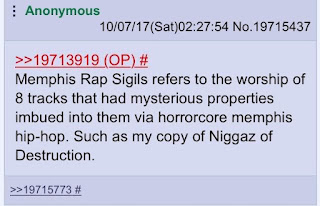 This is the first time we hear of 8 specific tracks. There isn't a 100% consensus, but it's generally agreed that these are the 8 sigils of Memphis rap:

2.Children of the Corn - Deep in the Woods

4.Lil Ramsey - Magnolia a.k.a. Down With Magnolia (feat. Tommy Wright) 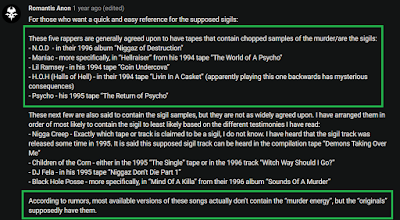 Another key aspect is mentioned here. If you listen to any of these songs on Spotify or YouTube, it doesn't count. You have to listen to the original cassette recordings in order for "it" to work. This is tricky, because most of the tapes had extremely limited pressings - so most copies are either lost to history or worn-out and unplayable at this point.

Occasionally, supposed original copies of the tapes pop-up on Ebay. If you buy one, good luck!

Based on the available info, it seems that original copies of some or all of these tapes are what constitutes the "Memphis Rap Sigil": 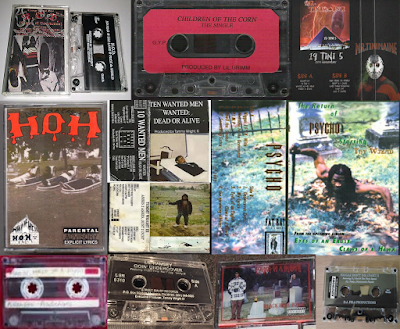 What kind of evil is imbued within these tapes?

So what happens if one person collected original versions of all 8? Is it like some diabolical version of Dragon Ball Z? A huge evil Dragon pops out of your 40 and grants you any wish you want? Or can the power only be harnessed by the original creator of the sigil?

To this day, we're still getting more info/theories regarding the sigils. From earlier this year: 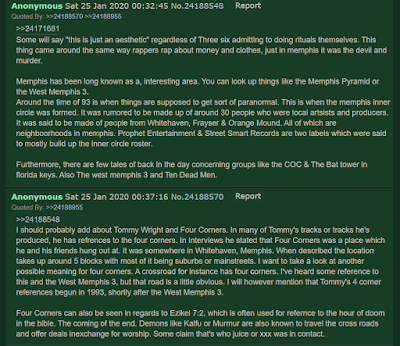 Speaking of the Triple 6 Mafia - they are easily the most popular and integral part of the Memphis rap scene, yet none of their music is involved with the sigils. Juicy J remains an incredibly popular and successful figure to this day. Coincidence?

Dead Rabbit Radio, one of my favorite podcasts, has one hell of a take on the concept. It stems from a strange post on /x/ in July of 2018.

They admit there's no real evidence, but it's one hell of a theory.

Other rumors exist that the murder(s) used for the sigils actually took place at the "Sugarloaf Bat Tower" in the South Florida Keys. 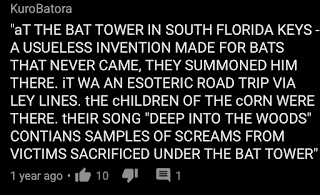 It's unclear, but this user may be referring to a string of satanic murders that happened in Monroe County, Florida in the late 80s. Two of the victims had their hearts cut out and stolen. They still haven't found the killer(s). From the Miami Herald:

Sherry Perisho slept under the stars in a little green dinghy. She talked about the magic of Saturn. She said she had the power to make rain.

Everyone in these once heavenly Keys called her the Rainmaker.

Then, on the night after a full moon, someone from hell — lunatic or satanist — snatched the Rainmaker’s soul.

A killer slit her throat, cut open her chest and stole her heart.

The murder of Sherry Perisho, 39, a high school beauty queen from Illinois, is the third unsolved homicide of a female along this 10-mile string of rural, coral-rock barrier islands — Big Pine, Little Torch and No Name — within a year.

One of the other victims, like Perisho, had a missing heart, and some people in these Keys, usually laid back and relaxed, are very, very frightened.

“The consistent story is that the murders had something to do with a satanic cult connected with drug shipments,” says Nancy Banks, 37, a bartender.

So what do you think? Were these dudes just LARPing as Satanists in order to sell a few records? Or was there something truly sinister going on in Memphis? Were a few of these rappers actually deeply in-tune with the infinite powers of chaos magick? How much of an effect can music actually have on us? If music can be used for evil purposes like this, is there also a counterbalancing force of good?

Who knows how deep the rabbit hole really goes.

"If you wish to understand the Universe, think of energy, frequency and vibration." - Nikola Tesla